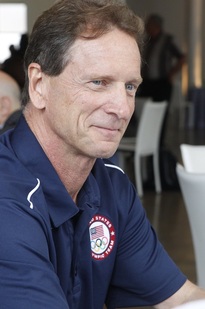 Phil Cheetham, a former Olympic gymnast, has been an innovator in sport biomechanics for nearly 30 years. He co-developed one of the first sports motion analysis systems while working as Head of Engineering Technology for the US Olympic Committee’s Sport Science Program in Colorado Springs in the early 1980′s. Since then he has co-developed several motion analysis systems for companies he has co-founded, including Peak Performance Technologies Inc., Skill Technologies Inc. and Advanced Motion Measurement Inc. Since 2004, Phil has also been working at the Titleist Performance Institute as Head Biomechanist and Director of the TPI Biomechanics Advisory Board. There, Phil co-developed TPI 3D Analysis, a motion analysis system specifically designed to measure golf swing motion and efficiency using a respected biomechanics principle called the Kinematic Sequence. The team at Titleist call Phil “The 3D Guy” because of his innovation in three-dimensional motion measurement which has proved to be invaluable in rapidly improving athletic performance.

In 2010 Phil accepted a position as Senior Sport Technologist for the United States Olympic Committee, which involves the selection or development of technology that will help improve the performance of the US athletes.

Phil has published many research articles on the biomechanics of sports, including gymnastics and golf. In 2000 he was awarded second place in Golf Magazine’s “Golf Science” competition for his research on the “X-Factor Stretch.” Phil’s most recent publication, “Comparison of Kinematic Sequence Parameters between Amateur and Professional Golfers,” appears in Science and Golf V. This research validates the importance of an efficient motion sequence and good accelerations and decelerations in the downswing of golf.

In this article "The Linear Kinematic Sequence" on mytpi.com, Phil addresses the importance of an efficient sequence of motion in a skilled golf swing.

In this article, "Measuring the Timing of the Golf Swing from Video" on mytpi.com, Phil will show you how to measure the timing of the backswing, downswing and follow through all with a video camera.

Phil discusses the Leading Joint Hypothesis and how it applies to your golf swing in "A New Motor Control Theory" on mytpi.com.